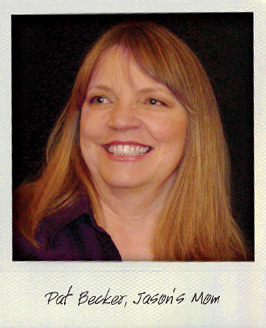 I would like to thank you all so much for your interest in Jason. It is very comforting to me to know how much you all still care. As you can imagine, life is not “normal”, (although I guess it never really has been with Jason as a son) and things that take a week or a month, sometimes take years. That is depressing, especially for someone like Jason, who has a mind that is quick and snappy and a body that can’t move.

Jason has written an article. These are his most recent words. He describes his experience of going to the hospital, being in intensive care, and getting a tracheotomy and gastrostomy, or as he would describe, “two shiny new holes in my body.” His health has stayed pretty constant since that article was written.

As far as the music goes, (also mentioned in his article) he is still waiting for Warner Brothers Records to release his album, “Perspective”, on which Eddie Van Halen will perform one of Jason’s compositions. The delays have been because of a hectic touring schedule for Van Halen. Eddie is keeping in contact with us and, although the project is taking longer than we all anticipated, we are excited about the re-release of “Perspective”.

Shrapnel Records released Jason’s “jams”. These are pieces of music Jason has recorded throughout his life. They are improvisations, studies for compositions, pieces that became songs, even some singing and playing when Jason and Ehren (his brother) secretly went to Gary’s (their father) art studio when they were 8 and 5 and recorded themselves playing and singing Bob Dylan songs.

We would like to share some photos of Jason’s life, including his early family life, the Cacophony years and some more recent photos taken. You may notice artwork throughout these photos. It shows up on his CD’s, is sometimes the background of photos, and even appears on his clothes. This art was created by Gary Becker, who was Jason’s first instructor, a great influence and a wonderful inspiration to Jason as an example of an artist who worked on his craft relentlessly, lovingly, with discipline every day and still had time to support his family and allow me to stay home with my kids. Examples of Gary’s art can be found on his web site.

Thanks again for your interest and support and please e-mail Jason. We will try to keep you all informed, up-to-date and answer any questions we can. 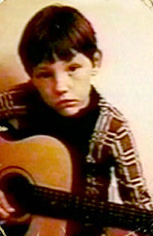 Our son was born almost knowing what he wanted to do early in life; be a guitar player. He worked constantly and loved it. He made a demo tape and a record producer was interested. He graduated from high school early to make his first album at the age of 17. He was great; he was part of a duo guitar team with a band called “Cacophony.” He played along side of another great guitarist named Marty Friedman. They made three albums together. I was so lucky to witness them playing together. They are both masters of the guitar and they knew what they wanted from their music. They had a great deal of respect for each other; they will love each other forever. I got to witness their humor and their hearts; in my mind, that is what becomes their music.

After “Cacophony” and a classic guitar solo album called “Perpetual Burn,” Jason heard that David Lee Roth was looking for a guitarist. He sent a tape. They called. He auditioned and was chosen as the next guitarist for David Lee Roth. A week later he was diagnosed with ALS. As our family and friends collapsed in grief and shock, Jason went to practice and prepared for an album which was called “A Little Ain’t Enough.”

By that time, we had managed to stop crying and hiding our heads under our pillows in utter heartbreak and misery. Jason was determined to do this project and we would do anything we could to help him, of course. Gary quit his job and moved in with Jason in Glendale. I stayed home with Ehren, who was a junior in high school. I worked. Ehren and I got hooked on “Star Trek: The Next Generation”. I made frequent trips to see Jason and Gary, and Jason always called with new guitar parts for me to hear. I would have miserable, sad days, and when I checked in at night, by phone, find out that Jason had a great day.

“Perspective” was long in the making. Technically, it took five years from beginning to end, but it had been simmering in Jason longer than that. He had bits and pieces of melodies in his head. His songs would happen in different ways. Some came out all at once. I remember hearing, over the phone, the song that became “Blue”. It was so beautiful. Jason was alone in his hotel room in Vancouver (recording “A Little Ain’t Enough”) and he started improvising and that’s what came out. His songs always touch me so deeply because I can hear his heart in his music. I have heard that from so many people. It is true. Jason’s heart is in his music. “Rain” came out of him at a friend’s house on a rainy day.

I am fascinated by how Jason sometimes builds songs. He has one tiny idea and adds layer upon layer to that. He reminds me of Bobby McFerrin in that way. You will hear something very intricate and beautiful, and as he peels the layers away and brings them back, you realize that the tiny idea all alone is just as beautiful as the whole, finished piece. He is complex and he is simple; in music and in life.

I want people to know about Jason.